Ballet Theatre of Scranton was founded in 1958 by the late Constance Reynolds. Its mission is to provide Northeastern Pennsylvania residents with the finest in dance education and performance, as well as the opportunity to work with internationally known choreographers and artists. The company consists of a Senior, Apprentice, and Children’s Company. The Senior Company is at the forefront in presenting full-length classical ballet with an extensive repertoire of work.

In 1991, Joanne D. Arduino, was appointed Artistic Director of Ballet Theatre of Scranton. Mrs. Ardunio maintains this position to the present day. She assumes all the duties of producer, director and teacher for the Senior, Apprentice and Children’s Companies.  Mrs. Arduino is also the owner of The Dance Studio: The Official School of Ballet Theatre of Scranton.  Since 1992, Ballet Theatre of Scranton and its official school, The Dance Studio of Scranton, have had their home at ‘Lackawanna – The Laundry Building’ located at 310 Penn Avenue, in approximately 6,600 sf on the entire 2nd Floor, in Scranton, PA, housing three (3) separate dance studios, board room and office space, as well as a area break area for time between classes, etc. 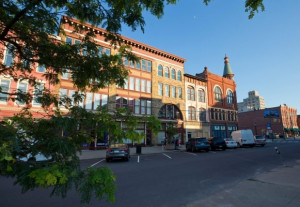 Ballet Theatre is proud to be a recipient of the J.C. Penney Company Golden Rule Award.

2000, 2001 and 2008- Pocono Northeast Award for Excellence in Artistic Contributions

Dance Magazine noted The Nutcracker is the only production of its kind in the United States.